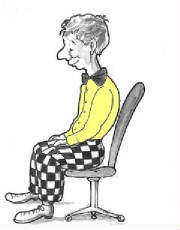 You probably already know that smoking cigarettes or breathing secondhand smoke, long-term exposure to the sun, abuse of alcohol, drugs, or medications, and a poor diet or over-eating are bad for your health.  Now you can add prolonged sitting to that list of behaviors that significantly increases your risk of major disease.
Scientists researching some of the most common and deadly diseases in our society, such as obesity, heart disease, and diabetes, have discovered that sitting has profoundly negative effects on fat and cholesterol metabolism.  Fat in the bloodstream is normally broken down by the enzyme lipase and then absorbed into the muscles as fuel reserves. 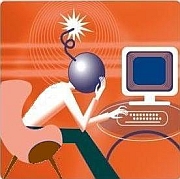 The circulation of lipase, the fat-absorbing enzyme, is shut down by the inactivity of prolonged sitting, leaving fat in the blood stream to re-circulate and become stored as body fat or to clog arteries.  It is no wonder that numerous studies have shown that people who sit a lot have two and three times the rates of obesity, heart disease, and diabetes.

Here’s the kicker.  If you workout nearly every day for half an hour or so—like you are supposed to—but you are mostly sedentary the rest of your waking hours each day, the half-hourly exercise sessions are not sufficient to overcome the negative effects that multiple hours of prolonged physical inactivity has on your fat and cholesterol metabolism.  One of the scientists performing this research, Marc Hamilton, Ph.D., a professor of biomedical sciences at the University of Missouri in Columbia, referred to chair time as an “insidious hazard.”

Indeed, chair time is hazardous for most people on two counts: 1) when seated with improper posture the spine is bent out of its normal shape, which strains the discs, muscles, and joints —often causing back pain, spinal degeneration, and deformity; and 2) when seated for too long the body’s system are idle including circulation, respiration, and digestion —often complicating systemic health problems.
The health hazards of prolonged sitting have been further studied on large population groups in Canada (17,000+), Australia (8,800), and the U.S. (123,216). The Canadian study, published in 2009, was led by Peter Katzmarzyk, Ph.D., of the Pennington Biomedical Research Center in Louisiana. The Australian study, published in 2010 in Circulation: Journal of the American Heart Association, was led by David Dunstan, Ph.D. of the Baker IDI Heart and Diabetes Institute in Victoria. The U.S. study was led by Alpa Patel, Ph.D. of the Epidemiology Research Program, American Cancer Society, and published in 2010 in the American Journal of Epidemiology.

In ALL studies the researchers found that people who sat more had a higher death risk, regardless of whether or not they exercised, and independent of other known risk factors like smoking, obesity, and hypertension. That makes prolonged sitting a significant "stand-alone" risk factor for long-term health. 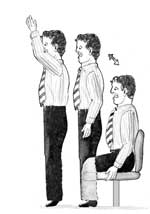 What to do? Sit up, get up, and reach up!
The act of sitting up with correct posture in a supportive chair maintains the normal shape of your spine and minimizes strain. The act of standing upright and moving your muscles stimulates circulation and the action of the enzyme lipase to help breakdown fat in the bloodstream - and standing compared to sitting also burns more calories. 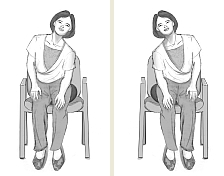 It also stands to reason (pun intended) that moving about purposefully in your chair from time to time, as found in portions of the 60 Second Workout or the Sit-Disc Mobilization as described in The Science of Sitting Made Simple book, will also engage muscles and trigger the action of lipase in the body to metabolize fat.

Whatever you do, don’t just sit there!

In addition to the systemic health risk of too much sitting, there is a societal epidemic currently in progress of spinal deformity caused by poor posture. There has never seen so many young people with such significant structural deviations of their normal spinal contours as today. What will they look like at middle age?

The personal computer became commonplace in the late 1980's. That means the generation of people now in their 20's is the first to have access to computers for their entire lifetime. And it shows. Spinal deformity in the 20-something age group is becoming as prevalent today as their hand-held electronic devices -- deformity that used to be seen only in much older age groups.

The most common developmental deformity related to poor posture habits is thoracic spine hyper-kyphosis and forward head carriage with loss of the normal cervical spine lordosis. That means increased roundedness and rigidity of the mid and upper back, head jutted forward, and straightening or reversal of the normal spinal arch in the neck.

In order for this to happen, the spine has to be bent out of its normal shape, that is, deformed. It is important to realize that at this point the problem is not just "poor posture" -- the structure of the spine has been changed.

If the poor posture habits that are the underlying cause of this progressive deformity continue unchecked, there will be early and significant degenerative disc and joint disease of the spine, stiffness and loss of motion, arthritic pain, and eventual neurological implications as well -- unnecessary consequences of a preventable condition. Finally, be aware that marked rigidity of the mid-back (ribcage) results in a compensatory demand on the neck and lower back in forward bending, back bending, and rotational mobility, thus increasing the risk of herniated discs in the cervical and lumbar spine regions.


Studies have also shown that sitting posture has a significant influence on self-confidence and the way the others perceive you, showing that poor sitting posture is hazardous for your psychological as well as your physical health.